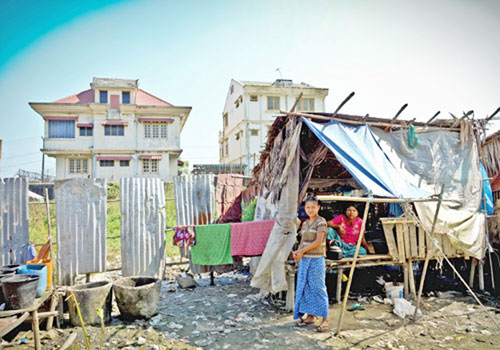 The plan began in 2012 and it is intended to be implemented over the course of five years.

As the plan is reaching its first five-year marker, the government should be building an estimated 300,000 housing units every five years.

“However, during 2011 and 2016, they [construction] didn’t reach the target”, said U Thar Htay, chair of the Myanmar Construction Entrepreneur Association (MCEA).

The project of housing development began in 2011, at the time of U Thein Sein’s government. But now, the current government has a new strategy for the issue, said U Thar Htay.

It is the Ministry of Finance and Planning which will take the lead for the initiative, and the government will contract out housing development plans through the MCEA, he added.

However, the MCEA would like to commence the project as soon as possible, so they expect construction to start in this coming fiscal year.

“We haven’t discussed an exact plan, yet, and where … and when it would start. But we will try to get started as soon as possible. We will implement low-cost in places of business; areas that are affordable in a good location,” he said.
The MCEA is also pursuing a joint venture with Singaporean firm Surbana Jurong. Both firms signed a memorandum of understanding (MoU) on February 3 to implement low-cost and affordable apartments for government housing development projects together.

Surbana will oversee the technical and professional management, since the Singapore-based company was instrumental in designing and developing Singapore’s public housing for over half a decade.

“With this partnership, we will provide local insights, while tapping into Surbana Jurong’s technology and design to develop affordable housing that is also functional for residents,” said Teo Eng Cheong, the firm’s chief executive officer.

He added that the Union Government has been focused on its 2030 development plan to provide one million homes across Myanmar, and the MoU between Surbanan Jurong and the MCEA for housing development will play a part in helping to realise this vision.

“Myanmar is also a young country, with a median age of just 27. As Myanmar’s largest city, Yangon has also seen the fastest population growth as young people migrate to the city for work,” he said.

Mr Teo also commented on the goal of the country’s housing development that Myanmar’s economy would continue to grow, so in the future the number of people who reside in and own an apartment will eventually overtake the number of those who rent apartments.

Last month, the Myanmar Times reported that as rents in the commercial capital rise, the longstanding arrangement of paying six months’ or even a year’s rent upfront is increasingly a burden to Yangon’s residential and business tenants.
Rental issue is a problem for many Yangon residents. The situation might change with the upcoming Real Estate Service Law, according to Daw Moh Moh Aung, secretary of Myanmar Real Estate Services Association (MRESA), which would like to see the property sector properly supervised and rental economy regulated.