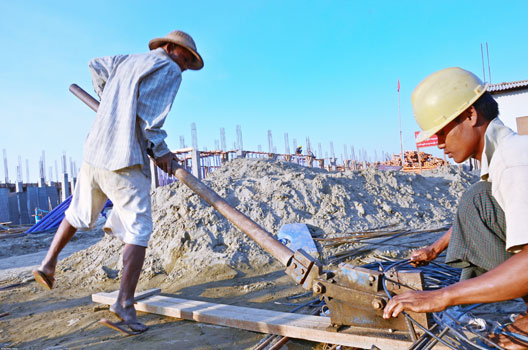 In the coming fiscal year, the government has been granted K46 billion to build rental housing nationwide, which will cover the cost of around 4000 units in 132 apartment blocks, said U Yu Khaing, director of the Department of Urban and Housing Development (DUHD).

Officials have previously suggested up to 2 million squatters could be living in Yangon alone, vulnerable to being evicted from their homes at short notice and in need of permanent housing.

The largest low-cost housing development under construction in Yangon is the Mahabandoola housing project, which will cost around K20 billion and provide 1200 new units in South Dagon township. In Mandalay, the government will build 1000 units at a cost of K10 billion

Around 4500 people have applied to rent apartments in the project, said U Yu Khaing, adding that 48 apartments are reserved for people who previously lived on the land, if they can afford the K30,000 rent per month. The remaining units will be allocated at random through a lottery system.

U Yu Khaing said the apartments are aimed at people who do not already own real estate.

On January 27, as 200 police stood by, bulldozers wrecked a shanty town in Yangon’s Mingalardon township, making several hundred families homeless. Nearly 500 houses had been built on the 560-acre plot, on Pyinmabin industrial zone, which was leased to military-owned Myanmar Economic Holdings Company Ltd in 1993.

Yangon Region government also removed more than 200 squatter homes from Dagon Seikkan township in the last week of January, and has issued eviction notices to those living in Shwe Lin Pan industrial zone, Hlaing Tharyar township, where the greatest number of squatters are concentrated.

In Dagon Seikkan, many people still live on 300 acres of DUHD-owned land which is being redeveloped into a major low-cost housing project.

The DUHD called a tender for private companies to build low-cost and affordable housing as well as hotels on the site last year. To allow tender winners to start the project, the department asked Yangon Region government to remove those living on the land.

“We don’t want to cause an unexpected negative social impacts and remove squatters immediately,” U Yu Khaing said. “That’s why we have been flexible with the rules. For Dagon Seikkan we must remove them because the project needs to begin.”

He added that the low-cost rental housing budget is inadequate, but pointed out that the Union government needs to spread its budget to fund the development of every sector, not just housing.

“There are so many squatters. Instead of demolishing their houses, it would be better to provide them with rental housing,” he said. “YCDC can’t afford to do that, but the government can. Current housing projects cannot meet the demand.”