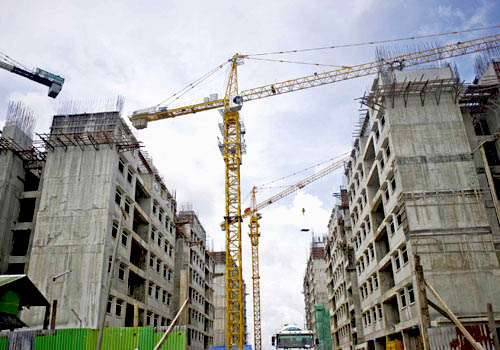 The government will ensure a fair and transparent tender for the construction of low-cost housing in Hlaing Tharyar and Thanlyin townships, a senior Ministry of Construction official has said.

Affordable housing projects built under the previous government werecriticised for a lack of transparency, which developers say led to poor quality construction.

U Min Htain, director general of the Department of Urban and Housing Development, said this tender would be for local companies selected in accordance with set construction costs and other regulations.

“We will only issue permits if the companies meet prescribed rules,” he said. “We will ensure transparency.”

U Yan Aung, general manager of Asia Construction, said that the new government had improved its tender process and reduced the chance of corruption, but that the push for better quality and lower prices meant lower profits for the winning firms.

“The government wants high quality but at low prices,” he said, adding that the new administration had set a construction cost of K16,000 per square foot.

The price the government charges residents for low-cost housing is closely tied to the construction cost.

“There’s also tax and other charges, so companies that win can’t make much profit and some find it hard to even apply,” said U Yan Aung.

Private developers have from September 1 until September 30 to make their tender applications, according to a Department of Urban and Housing Development announcement in state media on August 29

The Hlaing Tharyar township project will be built on a 23-acre plot on Kyan Sit Min Housing Project No 2. The Thanlyin-Kyauktan township project is located on a 31-acre section of the Thilawa special economic zone, according to the department’s deputy director U Nay Myo Hlaing.

“Applications must include building designs and the tender scrutinising committee will select the winner,” he said.

There are more than 100 private companies involved in developing affordable housing projects across the country in cooperation with the Department of Urban and Housing Development, according to a department statement.