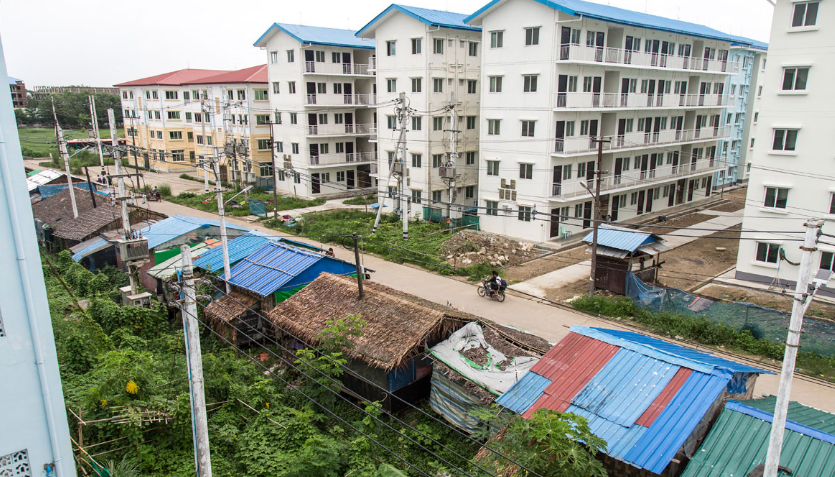 Apartments in the Yuzana housing project, a low-cost residential complex in Yangon’s Dagon Seikkan township, first went on sale to the public in March 2016. The project was developed by the Department of Urban and Housing Development (DUHD).

Though apartments at the complex have been available for purchase and rent, many residents have complained about the quality of the buildings. Some of the newly-built apartments have problems with electricity and plumbing, given that electricity wires and pipes had been stolen.

Residents were also concerned about the strength and structural integrity of the buildings. Even though the foundations were constructed with reinforced concrete, some believe that the use of unqualified contractors has lead to fracturing in the walls.

“Many of the residents are permitted to stay, but we don’t feel comfortable without a proper electricity supply – a problem we thought would be resolved when the apartments first started to sell,” Daw Su Hlaing Htwe, who bought an apartment two years ago, told Metro.

“When we started living here, we didn’t have electricity. We only started to receive electricity about a month after moving in. Squatters started living nearby and many of our things were stolen. There are no effective measures for security in the housing so far,” said Daw Su Hlaing Htwe.

Potential buyers’ names were entered into a draw, and those whose names were selected were able to purchase the properties. Despite having their names selected, many of the apartments were still not ready when the buyers went to inspect the property. These apartments were agreed to be transferred only after the contracts had been signed, said the Department of Housing Development’s deputy director Daw Khin Theingi.

“We need to finish the apartments by the deadline. The buyers will have to sign the contract, and we guarantee that the rooms will be completed after the contract has been signed,” said Daw Khin Theingi.

Some apartments had been completed, but cracks in the façade had started to appear; other apartments’ interiors are still under construction.

Some of the buildings were built with interior steel frames and others with bricks. Most are four-storey buildings, and each floor includes six rooms – resembling housing for civil servants. Despite the different construction materials, the similar problems have emerged across the buildings.

“After I complained about the poor quality of the buildings, a woman at the housing department said “don’t take it if you don’t like it,” Daw Hnin Wai Tun, whose name was selected in the Yuzana Housing Part 1 draw, told Metro.

She continued, “We had the crack in the wall repaired twice, and even if we continued to make repairs nobody else will buy this apartment. When we informed the housing department, they said it will take about 6 months to prepare the contract before we buy the apartment.”

Daw Hnin Wai Tun rents an apartment at Yuzana Housing Part 1. As the repair work for the apartment is still unfinished, she continues to rent rather than purchase.

The government constructs the buildings and offers long-term installment plans for those willing to pay. Purchasers are not permitted to sell the apartments within a period of five years, though many are keen to sell via real estate brokers the very next week or month after signing the contract.

“We receive complaints almost every day, and although we’re not perfect most people understand the problems once we have explained them. There haven’t been any serious problems yet,” said Daw Khin Theingi.

Currently, the Urban and Housing Development Department’s engineers are repairing and decorating some of the buildings. “This work is almost complete,” she said.

“Wires were stolen from some of the buildings. As we need to work with the EPC there have been some delays. But during the repair period, we have allowed some people to move into the apartments without electricity,” Daw Khin Theingi confirmed.

Many people who have applied for the low-cost housing have taken out loans with the bank and, as they cannot move into the units, still have to pay rent on their current homes. As the repayments and the rents are weighing them down, some are struggling financially, said Daw Hnin Wai Tun.

“Our rent is due. But as we don’t know when the units will be finished, we can’t estimate how much more future rent we need to pay. We have to make the bank payments too, so we are in trouble,” she said.