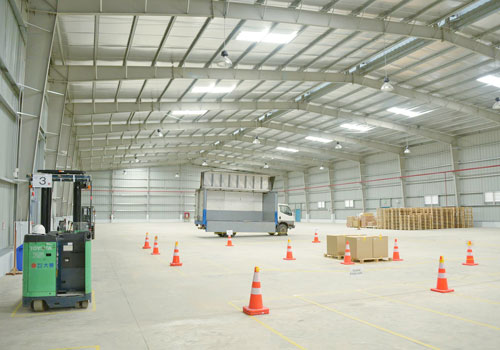 In 2014, the Economist boldly claimed that if Buddhist monks represent Myanmar’s past, the tenants of Thilawa and the two other SEZs in the works are bets on its future. Backed by the Japanese government and spearheaded by three major Japanese trading houses, the initial success of the Thilawa SEZ relies on the confidence of manufacturers on Myanmar’s potential.

Daizen Myanmar, a logistics company, has placed its vote of confidence on the manufacturers since 2015. At that time, the firm’s managing director, Tomoaki Yabe told the Myanmar Times that he chose Thilawa SEZ as the location of Daizen’s first ASEAN investment on the advice of representatives from Mitsubishi Corporation.

But he was not the first to arrive – two years earlier, CEA Projects Myanmar was officially established with 10,000m2 of warehouse and office space in the Thilawa commercial port, and, looks beyond the country to target cross-border transport along the borders of Thailand–Myanmar and Myanmar–China.

Fast forward two years, Daizen’s warehouse, covering 10,000m2, now stands above its 17,000m2 of land, which was leased for 50 years. The company aims to support the efficient flow of goods, from the procurement of raw materials to the distribution of products to consumers, covering the entire supply chain. The firm boasts 24-hour security guards, CCTVs, mechanised facilities, small processing technologies – such as tagging, packaging, x-ray inspection and labelling – all imported from Japan.

These technologies are a newcomer to Myanmar’s long-isolated logistics industry. Local warehouses are old and unmechanised. The hardware is completely lacking – no operational equipments such as dock levellers. There are no security guards or CCTVs. Strangers and animals have easy access into the warehouse, which is potentially problematic for some types of goods. They may have fire extinguishers but there are no fire hydrants or smoke detectors. Power supply is not stable, which is another problem for some cargoes. There is also no insurance policy. Overloaded trucks ply along the roads and highways while posing a risk to road safety.

Indeed, it is the warehouse management system which sets international companies apart from the local players. Daizen’s logistics centre, for example, has a modern system which caters for food and beverages, taking into account expiry dates, and shipping out older ones first. Thilawa’s power generators are also designed to avoid power cut, so temperatures in freezers are not disrupted.

Logistics covers transport, warehousing and the management of goods. But nowadays the industry is as much about the management of data as that of cargoes. Daizen Myanmar employs barcode scanners to manage all its data.

“We have the barcode scanner to manage all those data, essentially managed by warehouse managers,” Mr Yabe said, adding that the firm also provides freight forwarding and transport services, customs clearance, consulting and operations services.

“There are many factories here. Currently I heard 80 companies have such contracts in the SEZ,” he said. Manufacturers in the SEZ are one of their major clientele.

“They all need to import raw materials for their production. Most of that come from outside Myanmar. Some come from within Myanmar,” he added. Hence there will be a demand for customs clearance, freight forwarding and transport services. Their logistics centre also stores materials for factories and final products, before the manufacturers want them shipped out of the country or delivered within Myanmar.

Still at an early stage

Freight forwarding and customs clearance are going well for Daizen although the market for warehousing is growing rather slowly, the Myanmar Times was told. The firm serves a wide range of clients, from garment factories to car radiator and speaker production.

There are currently around 20 companies operating factories in the SEZ and the rest of the tenants are expected to start their operations once their construction is completed. But Mr Yabe thinks there is another reason for the slow growth of market demand: factories have their own storage space and they will not need much external support until they reach full capacity production. He expects that to take place within the next two years.

After a long wait of more than half a year, Daizen became the first company in Myanmar to receive their Bonded Non-Resident Inventory Program license from the Thilawa SEZ Management Committee. Before the introduction of the BNRI, there were no registered bonded warehouses. Bonded warehouse allows the storage of foreign cargoes held on account, i.e. storing cargoes before paying customs duty and commercial tax.

On a more technical level, cargoes held on account refers to cargoes in transit for storage in free zone warehouse pertaining to the temporary storage of cargoes from a foreign supplier without payment of duties and other taxes until such cargoes are sold or shipped out of the country.

“Everywhere else in the world there are bonded warehouses, in Myanmar there isn’t,” Mr Yabe said. “That’s one part which is quite unprecedented in Myanmar.”

The other part is the ownership of cargoes. Foreign companies cannot do trading in Myanmar. The current method of how foreign suppliers distribute their products is to make a distribution contract with a local partner. The local partner will handle import procedures and sales.

But with the new scheme, foreign suppliers can import directly to Thilawa SEZ and own goods stored in Myanmar.

For foreign suppliers hoping to penetrate the Myanmar market, the scheme means they do not need to establish a domestic company in Myanmar to trade.

It takes two or three months, or up to six months to establish a company in Myanmar... [such as] getting their licences, their regulations – it’s not easy. For the companies it is a big plus.

“All foreign suppliers need to do now is to find clients. They don’t need to think about company registration, setting up bank accounts, establishing local offices etc, and they don’t have to pay custom duty until the goods are sold to clients.”
For companies who already have a local distributor in Myanmar, the scheme saves a lot of time previously needed for the importation process. In some cases, for example, the process can be shortened from 1.5-2 months to three weeks.

But despite the arrival of new technologies and schemes, the transport hardware is not ready for the logistics sector to take off.

CEA Projects Myanmar, which focuses on energy, oil and gas, telecoms, and industrial developments, also has their  fair share at the SEZ. John Hamilton, country manager of CEA in Myanmar, told the Myanmar Times during an interview that both road tolls and infrastructure are major challenges for the sector in the country.

“Road tolls are for sure the highest we have ever encountered in any country we work in Asia. Up to 35% of our trip cost is road tolls anywhere up to K340 per km is spent on just road tolls.

“We 100% agree with tolls but make them reasonable and make sure the money is used to improve the roads which is happening,” he said, adding that the bridges present a huge limiting factor in accessing some regions of the country by cargo trucks – the cargo carrying capacity is restricted due to low bridge weight limits.

For Daizen, congestion leads to inefficient use of the asset.

“It becomes inevitable for us to charge more from our client for the lost time,” Mr Yabe said, “Service level of logistics is limited greatly from congestion. On time delivery is something that logistics companies cannot promise to our customers in Myanmar.”

Opening up the new Yangon-Mandalay highway

For both Mr Yabe and Mr Hamilton, the government is working to improve the road infrastructure and should continue to do this with vigour. Mr Hamilton particularly highlighted the importance of opening up the Yangon-Mandalay highway to large cargo trucks. Currently, no trucks are allowed on the new highway.

According to Mr Hamilton, allowing access to the new Yangon-Mandalay highway for larger cargo trucks would have various major effects.

First, that would improve traffic safety on old Yangon-Mandalay highway. The new highway will take the heavy trucks off it and away from small towns and villages.

Second, that would reduce the time needed for trucks to shuttle between the two cities by at least 20%. Currently this is around 3 day trip each way, culminating into a 6-day return journey.

The toll money could be funnelled straight back into improvements and upgrades of the highway, which acts as the main artery for Myanmar. An improvement along the infrastructure would benefit all transporters.

Large trucks can run more efficiently on this highway and hence it improves the fuel consumption and reduces pollution.
Mr Yabe agreed with this suggestion.

“Allowing larger trucks to access the new Yangon-Mandalay would benefit many relevant parties,” he said, adding that the government would enjoy increased revenue from toll fees collected, the transporter could reduce the traffic time while the cargo owner would see their logistics costs lowered.

Mr Hamilton noted that logistics companies would be happy to pay reasonable sum for the new highway and to follow the speed limit (he suggests 60km per hour) and weight regulations to ensure safety. Road integrity does not get impacted by these larger vehicles.

For both Daizen and CEA, Myanmar not only presents an important market, the country is also potentially a logistics hub in ASEAN. Mr Hamilton told the Myanmar Times that CEA would like to see cooperation in the cross-border areas, namely Muse (with China) and Myawaddy (with Thailand). If routine cargo could be pre-cleared at customs,  cross-border shipment in both directions would improve.

With the introduction of bonded warehouses and new digital technologies, the roads and bridges in the country will need a massive revamp before the logistics sector can really grow and prosper.