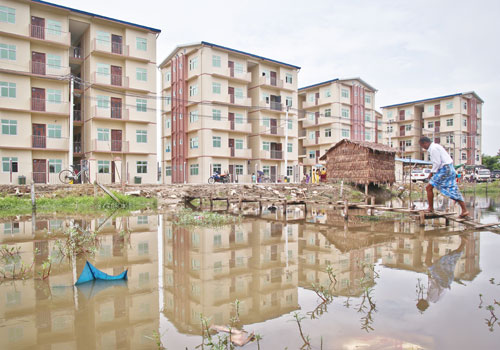 “The government of Japan provided the funding for UN-Habitat to provide housing and basic services for the most poor and vulnerable families in the project area. We asked government for land on which to build the units, and the government gave us land in Kyee Su ward,” said Bijay Karmacharya, country program manager of UN-Habitat.

The families will get a 350-square-foot unit and can live 30 years for free, but they must obey rules and regulations and maintain the units, he said.

“Besides obeying rules and regulations and maintaining the units, residents cannot transfer, sell or rent them and cannot use them as a store. If they disregard the rules, we can take back the unit and give it to another needy family,” he said.

Monday’s handing-over ceremony was for phase 1, while phase 2 continues, he said.

“This pilot project will contribute to solving the housing problems faced by the poor in informal settlements. When completed, it will provide quality housing for 180 families and more than 1000 people,” he said.

The organising committee carefully chose to give the units to the poorest of the poor, he said.

“This is a community-based project, and the committee met more than 20 times before choosing the families to stay in the units,” he said.

Minister for Construction U Win Khaing said the government has the welfare of the people as one of its foremost priorities.

“This was the first time ever that the government of Japan had made available a grant for the purpose of housing construction for the poorest and most vulnerable in Myanmar. It is an expression of goodwill by the people of Japan for the people of Myanmar,” he said.

Tateshi Higuchi, the ambassador of Japan, said, “The government and people of Japan assisted in putting some of the poorest and most vulnerable into decent and modern housing and look forward to future cooperation with the Union Government and Yangon on similar projects in the future.”

U Kyaw Kyaw Oo, who will live in one of the units, said, “This is really good luck and fortune. I never dreamt to have the chance in my lifetime to stay in a good-quality house for free, and I cannot believe yet that I got the unit.”

Dagon Seikkan township, located in eastern Yangon, is home to 166,000 people and was established in the 1990s.