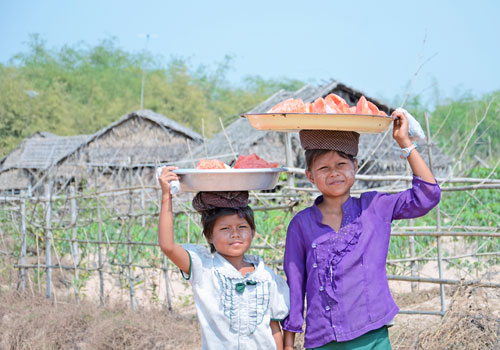 The township is the seat of Daw Aung San Suu Kyi, whose National League for Democracy is preparing to take office at the end of this month.

“Land prices have risen so high these days, and are rising day-by-day across the entire township,” said U Kyaw Lwin Aung, a local real estate agent.

The township’s popularity has soared since the November 8. 2015, election. Many of its residents say they believe Daw Aung San Suu Kyi will help the underdeveloped area by building roads and infrastructure.

Property speculators seem to have had the same idea and have come to the township in droves, wanting to buy a piece of the action.

“Speculators are buying and selling property all along the main roads in Kawhmu township. In the fourth week of February, one speculator was able to sell his land – just 1 acre – for K50 million, though he had bought it two weeks before for K30 million,” said U Kyaw Lwin Aung.

Another real estate agent in the township, U Myint Lwin, said activity in the township is bucking the general trend across the city. “The market is so slow in Yangon, even in areas demarcated for new development projects. But here, everyone hopes Daw Aung San Suu Kyi will help her constituency,” he said.

The NLD leader won her parliamentary seat in Kawhmu in the 2012 by-election and represents the township in parliament’s lower house.

“However, while speculators are here daily, they are only interested in the main roads, not yet in the streets and within the villages,” said U Myint Lwin.

“Within the villages, even along the wider roads, prices have stayed low. New roads in the villages will increase the value of the land.”

“Kawhmu township is even less developed than townships on the border of Yangon and Bago because it is so far from the city and in the past was not connected by road to many other townships,” said U Kyaw Lwin Aung. “But a road linking Kawhmu to Twante township was built last year and new roads across the township are already under development. In the past, transportation was so difficult here. Now the main roads are concrete, though the village roads are still dusty.”

From Kawhmu, the road to Yangon passes through Twante and Dala. For now, there is no bridge joining Dala to downtown Yangon. However, the government recently signed with South Korea to build a bridge, which is likely to be completed in five years.

Once the bridge is built, the journey between Yangon and Kawhmu will not take long, said U Kyaw Lwin Aung.

Despite the new roads, there are no plans to build projects or industrial zones in the township and most of the residents are farmers, said resident Daw Nge. “The land is not good for planting and two-thirds of the land here cannot be cultivated, so many residents have left in search of opportunities elsewhere,” she said.

“Those who remain are hoping that an industrial zone or big projects can create jobs nearby. There is a lot of land here, and we hope garment companies or other industries will open factories, so that both women and men can find jobs,” she said.

Kawhmu is one of 27 townships being developed under the World Bank’s National Community-Driven Development Project (NCDDP), which aims to give poor rural communities improved access to basic infrastructure services and to help the government to respond quickly to emergencies. Kawhmu township was among the worst-hit areas during Cyclone Nargis.

The World Bank has put $480 million toward the project, which eventually aims to cover more than 60 townships across Myanmar, and is providing technical support. The Minsitry of Livestock, Fisheries and Rural Development is also working on the project.

“Kawhmu will be developed under this project between November 2015 and 2019. For now, we are training residents to repair and build new infrastructure,” said an official from the rural development department.

For the administrator of six villages in Kawhmu, U Myo Myint Maung, the project will help the area to develop.

“Ten years ago, it took a full day to get to downtown Yangon because there were no good roads within the township, and it was extremely difficult to travel during the rainy season,” he said. “Three years ago, we were able to take public transport through Twante and Dala and then take the ferry across Yangon River.”

Last year, after the new road was built, it takes just 30 minutes to get from Kawhmu to Hlaing Thar Yar township, he said.