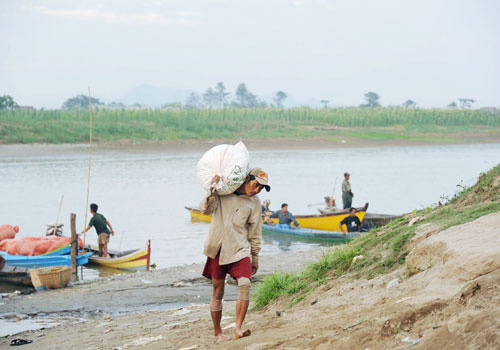 Royal Summit hopes to build up to 2 million affordable housing units across the country, including in Mandalay and Sagaing regions, in a project it calls “Infrastructure of Myanmar”. The Kayin State government is the first to give it the green light.

U Saw Kyi Lin, Kayin State minister for electricity and industry, said the local government carried out a “detailed assessment” before agreeing to the proposal.

“To be honest, we felt some doubt when Mya Htay Kywe Linn and Royal Summit jointly submitted an application for this low-cost housing project,” he said.

“Even though we trust Mya Htay Kywe Linn because it’s a local company, we knew nothing about the other company, apart from the cheap price it was offering. We discussed the proposal many times.”

To protect buyers against fraud, the government has opened a special purpose bank account for the project, he said. “This is to protect the deposits. We won’t give the company access until all the buyers have received their rooms.”

The project is being built near to the Hpa-an industrial zone, on 20 acres of former military-owned land. The state government sold the land to Mya Htay Kywe Linn for K13 million an acre. Construction work began on January 24.

The project will include 2560 apartments of 600 square feet each, in five-storey buildings. Units can be bought in instalments or paid for upfront in cash. The price varies: apartments cost K8 million if the buyer pays immediately, or K10.8 million if they pay in monthly K30,000 installments over 30 years.

Those who choose to pay installments can move into their apartments after two years of making payments.

U Than Oo, executive director of Royal Summit said he wants to develop many housing projects. “But the problem is applying for permission.”

“We have negotiated with officials all over the country, including in Yangon, to offer more low-cost housing projects, but couldn’t get them to agree.”

Twenty percent of the profits will go to Mya Htay Kywe Linn, which owns the land, and 80pc will be taken by Royal Summit, which will build the project.

“Our responsibility is the land, the rest will be dealt with by the other company,” said U Than Mya, the local company’s executive director. “We are now taking applications to buy units. The state government has made some provisions to ensure local people don’t face losses.”