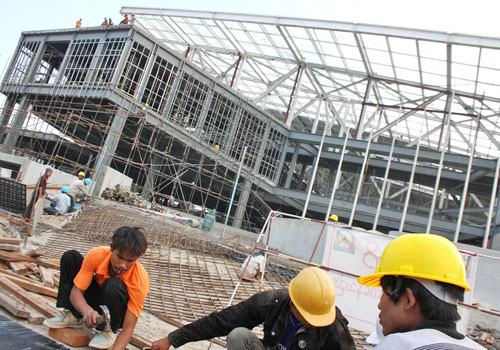 The MCC will be the first convention centre in Mandalay, and is situated on Theitpan Road in Mandalay’s Chan Mya Tharsi township. Construction began in August 2014, and officials from Mandalay City Development Committee had originally hoped to have it completed by December 2015.

When construction first started, one MCDC official said work would have to go on day and night for the centre to be finished by the December deadline.

“US-based architectural firm Gensler designed the building and we’re constructing it,” he said. “Once it is finished, expos, exhibitions, symposiums and wedding ceremonies can be held at the same time.”

The four-storey building will have an area of roughly 110,000 square feet, with underground car parking, two wedding halls with space for 1500 guests, meeting rooms for up to 264 people, six rooms for VIP seminars, sound and security systems, six escalators, four elevators and a car lift.

U Myo Aung, the head of MCDC’s Building and Warehouse Department, said in 2014 that as Mandalay’s lone venue, city hall, only had capacity for 600 people, it was necessary to build a larger centre.

After the MCC is finished the construction firms will turn to other projects on the same site.

“After this [MCC)] project, we’ll work on a 200-room hotel, a 16-storey office tower, two 18-storey condominiums and a four-storey shopping centre as the second step,” said U Zin Min Swe, adding that those projects would be finished in 2018, and will be built on the same 14.7-acre site as the MCC.