The Yangon of The Future? Slums and Gated Communities Side By Side 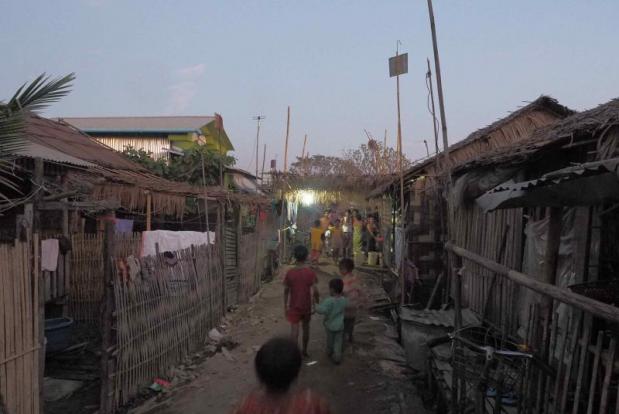 Sitting in a tea-shop next door to the National League for Democracy’s Hlaing Tharyar Township office, Oo Win Maung offers some advice for non-residents thinking of heading into the slums of his constituency in the evening.

“It's getting dark now, you've got a little while still but I wouldn't be down there after dark,” he said referring to Nyaung Yar, a notorious slum in Hlaing Tharyar, a township on Yangon’s northwestern outskirts where he won a regional parliament seat for the NLD in the November elections.

Nyaung Yar is a pocket of thousands of thatched bamboo houses by the Pun Hlaing river, deep within Hlaing Tharyar. Most of the shacks are only 2 meters wide, with their wafer-thin walls the only thing to provide a sense of privacy between neighbours.

Barefoot children play and street dogs nonchalantly wade through foul black sludge that pools around the stilted homes which have no piped water or toilets.

In the slum, crime is rife. An area on the banks of the Pun Hlaing River known as Thei Kwin is renowned for its criminal gangs, who intimidate locals and extort businesses, said Hla Htay, an NLD party member in Nyaung Yar.

If it's not criminal gangs intimidating the residents of Nyaung Yar, it's the outgoing Union Solidarity and Development Party government which, despite having to hand over office to the NLD come April, have made repeated threats to evict residents, he said.

A woman in her 60s, sitting on the bamboo floor of her shack nursing her baby grandson- whose round face is painted yellow with thanakha- said even though she left her hometown of Bogale in the delta after the cyclone, her uncertain future means she still lives in fear.

“I know this isn’t my land and if the owner tells me to go, then I have to but we have nowhere to go. I can’t afford to rent a place, we barely have enough money to live off,” she said.

Just 500 meters up the main road from Nyaung Yar is the regal entrance to the gated Pun Hlaing golf and housing estate. According to its website, substantial villas on plots of more than 800 square metres provide “the country's most beautiful homes… an exclusive peaceful oasis, all with a panoramic view of the beautifully landscaped community which surrounds you.”

Inequality is a hallmark of mega-cities in many developing countries, where the consequences of rapid urbanisation have gone unchecked and the poor are left to fend for themselves, while an urban elite adopts a secure, cosmopolitan lifestyle.

The microcosm that is Hlaing Tharyar reflects just this sort of urban trend.

One issue exacerbating urban inequality is the fact that many international development agencies and NGOs traditionally prioritise giving aid to the rural poor, though the consequences of urban poverty are often more severe, said Michael Slingsby, an urban development and poverty advisor and former UN-Habitat representative for Afghanistan.

“Urban poverty is very different from rural poverty. In the city, if you don't have any kyats in your pocket you can't survive. You have to pay for rent, housing, water, electricity. In the rural areas you can trade food and many things come for free,” he said.

Well-planned cities enable social cohesion between residents from a range of backgrounds, helping break down barriers of race, class and ethnicity. Conversely, when cities don’t plan for increases in population it drives up house and land prices, creating “rich and poor ghettos” said Jack Finegan, Urban Programme Specialist at UN-Habitat.

“You get a very unequal society and that inequality is manifested where people live- in our neighbourhoods and it means there can be less capacity for empathy and less development for all society,” he said.