The Peninsula to arrive in Yangon 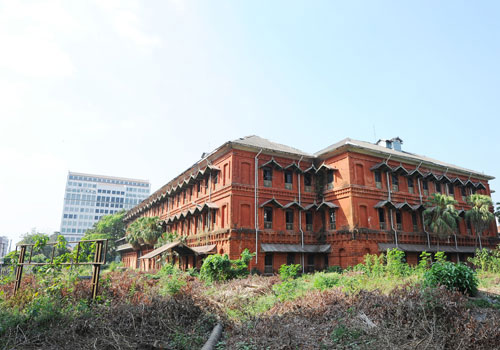 On February 16, FMI held a groundbreaking ceremony for the Yoma Central project, formerly known as the Landmark Development, in Yangon.

As share prices were on a downward trend, FMI chair Serge Pun held a meeting with shareholders at the Yangon Stock Exchange (YSX) office on February 4. He told the shareholders to maintain their confidence and that some projects would soon be implemented.

Share prices increased by up to K1500 per unit within the day following the meeting and reached K15,000 per share again. Due to the increase in its share price, FMI intends to sell more shares.

Share prices of all the listed companies on the YSX started to decline since last year. For the FMI, its shares, which peaked at around K60,000 per share, gradually decreased to K13,500 per unit in early February this year.

“The more projects we [the company] take on, the higher the value of the company,” FMI chief financial officer U Tun Tun told reporters on February 16, “So there is a likelihood that the company’s share will gradually bounce back to its real value.”

The fate of the old Burma Railways headquarters has long been in the limelight due to its enormous potential as a tourist attraction, its historic importance and its central location in downtown Yangon. The heritage building dates back to the 1880s and is one of the oldest existing colonial buildings in the city. Its fate is sealed as part of Yoma Central, a real estate development project located on a 10-acre site and involving more than US$600 million of investment.

Designed by Sri Lankan-British architect, Cecil Balmond OBE, the proposed development will feature not only The Peninsula Yangon hotel, but also Peninsula-branded luxury residences, two Grade A office towers, a business hotel, and serviced apartments. The project is a collaboration between Yoma Strategic (a Singapore stock-listed company), the FMI and the Hongkong and Shanghai Hotels together with other investors, such as Mitsubishi Corporation, the International Finance Corporation (IFC) and the Asian Development Bank (ADB).

On February 16, the partners announced that the investment permit for the proposed hotel development from the Myanmar Investment Commission (MIC) has been approved.

This project is divided into two divisions. For the Yoma Central project, Yoma Strategic owns 48pc, Mitsubishi company owns 30pc, IFC 5pc and ADB 5pc. The FMI accounts for only 12pc of the investment.

The investments financing The Peninsula Yangon are 70pc from the Hongkong and Shanghai Hotels, 24pc from Yoma Strategic and 6pc from the FMI.

“We believe The Peninsula Yangon will truly reflect the heritage and beauty of the city and we are confident that it will become an iconic landmark that locals can be proud of, as it brings a new level of distinction to the Myanmar hospitality scene,” said Clement Kwok, managing director of Hongkong and Shanghai Hotels.

Currently, three firms out of the four on the YSX – the FMI, Myanmar Thilawa SEZ Holdings (MTSH) and First Private Bank (FPB) – have seen their share values dropped. MTSH’s shares have plummeted from K90,000 per unit in 2016, to the current level of K4100 per unit (the shares were split into 10). The FPB initially sold its share at K39,000 per unit, but now it has dropped to K31,000. Myanmar Citizens Bank (MCB) is the only business to witness a rise in share value: its share price increased from the initial K6800 to K8900.